I am my own weight-loss guru Funny thing happened on the way to today's blog post. Last week I thought I'd be telling you about the miraculous amount of weight I lost following a new book's plan that promised a pound lost a day. I was psyched and bought all the groceries and printed out the high-intensity workout plan.

Three days in, I found that I had gained 2 pounds.

Five days in, not wanting to make things worse, I went back to my own plan -- the plan that allowed me to lose three pounds the week before.

Why do we I keep falling for the latest, greatest books/supplements/foods/DVDs/etc., when the best expert is right under our noses (or is our noses)?

In the run-up to starting the plan, I was excited yet calm in the notion that my days would be planned out for me. Turns out, that calm I felt helped me NOT do those self-sabotaging things that get me in trouble (hello, nighttime eating!).

But I've already been doing that. At the start of the year (and I keep writing about it) I got a copy of the book The Simple Diet and I jumped head-first into the plan that keeps things really simple -- shakes, bars, frozen entrees and 5 servings of produce a day. The only tweak I made was to sub out a home-cooked dinner, within the plan's calorie and protein parameters.

So I'm back on my own plan -- the plan that was working before I went on the plan that backfired. And the fretting over the weight gain is replaced by the renewed calm in knowing that I AM MY OWN WEIGHT-LOSS GURU. (Ommmmmm...)

But I did pull some ideas from the other plan:

Lesson learned: I need to stop getting in the way of myself. (Haven't I said that before?)

Tunes for Tuesday: I Would Do Anything for You, by Foster the People

It's a pretty chill song but the beat is fast enough for a slow jog (which is all I do.)

Working muscles for what feels like the first time ever

Continuing on my physical fitness with Sara... I must reiterate how much more focused and diligent I am in working out with a trainer guiding me. 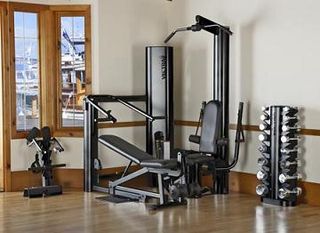 Last week we did "playboy poses" (dead lifts), "cheerleader posing" and "office squats".  I don't know what the exercises are really called, but naming them on my own makes them "more fun"...  The playboy poses worked my hamstrings, which I thought only athletes had.  Two days after our session, getting up out of my office chair was brutal... But it made me remember the good work I have done.

Yesterday, my friend and co-worker, Erika got into the mix with us.  In Sara's small home gym, the three of us worked our circuits... In no time, sweat was dripping in my eyes, and I was truly feeling the burn.

I envision not being able to lift my arms over my head again tomorrow... but all for a good result! We're long past the Nickelodeon shows in our household (I miss me some 'toons!), but Lazy Town was one of my favorites. The Icelandic import had a great message for the kiddies: Get off your butts and do something!

The past couple of weeks, I have been the Queen of Lazy Town (you can see me reigning over my kingdom in the Photoshop monstrosity above). The constant keeping my eye on the ball and obsession with weight loss can get tiring, especially when you've been doing it for 40 (yup, yup) years.

So, even though I've been tracking my food in SparkPeople and getting in three to four days of workouts, my head has not been in the game. And when that happens I don't lose weight -- not one ounce. But I don't gain either, so at least there's that.

So today, I'm leaving Lazy Town and getting back on track. I'm going to get back to working out every weekday and giving myself the weekends off from deliberate exercise. If some sneaks in over the weekend, then it's a bonus.

And I need to cut back on the calories, which I find difficult because I don't lose weight at 1,500 calories (sucks!). That means smaller meals and fewer and smaller snacks. So I'll be hitting the (water) bottle more often to stifle the growling stomach.

I reminded myself this morning that not that many years ago I was stuck at 260 pounds and now I'm stuck in the 230s so there has been some progress.

But if I want to see new progress, I need to buy a one-way ticket away from Lazy Town.

Tunes for Tuesday: I Feel Better, by Gotye

This song had me smiling, laughing and waving at squirrels (yes, really) yesterday morning. In fact, the whole album is fantastic. (By the way, I downloaded it at Amazon.com, where as of yesterday it's only $5.)

Working out with a trainer... and I didn't vomit

My good friend, Sara, who is an awesome SAT instructor, is also an amazing trainer.  She recently had a baby (6-8 weeks ago) and is back to her pre-baby weight -- probably even less.  She approached me at my desk last week to help me to lose my baby weight, with her direction, and I said yes (my baby is 12 years old).

We tried this before -- boot camp style, where she triumphantly made me vomit (my proudest Biggest Loser moment), But we stopped -- her pregnancy, my move, her move, we couldn't get it together -- until yesterday. I warmed up on the elliptical (the machine I love to hate -- or hate to love) then did upper-body weight work mixed with cardio.  I've never trained with a trainer before and to have her there, pushing me, made all of the difference in the world.

The gym at my apartment has all of the same equipment that she has, but in the hands of an experienced professional, it all made sense. I look at the stack of free weights, and the combo machine and I'm lost.  With Sara's guidance, I felt like a pro.

This was just day 1.  I've commited to Sara two days a week with her training, and four days on my own.  I'm excited to be doing resistance training -- I can figure out cardio on my own.

Tuesdays and Thursdays -- my promise to myself and to Sara.

Wordless Wednesday: This sums up a lot of processed foods

Tunes for Tuesday: Feel So Close, by Calvin Harris

If it weren't for my Rock My Run mixes, I swear I wouldn't know about any of these cool songs. (I pretty much listen to sports talk radio; I know, I'm a baseball geek.) I love this one because Harris' voice is so textured. It's also good to sing to when running.

Produce of the month: Strawberries I love strawberries. The strawberry has been part of my Shrinking Sisters blog header for a few years now. I chose the strawberry because they're cheery and colorful and so darn healthy.

And right now, there's an absolute glut of strawberries. The warm winter in Florida produced a bumper crop of berries so prices are low and supplies are high.

Strawberries are high in vitamin C, a great source of fiber and low in calories since they're so full of water. A cup of whole strawberries is only 45 calories, with 3 grams of fiber. And they're also a low glycemic fruit, if you're into that. Since strawberries are so plentiful, we might as well have fun with them, eh? I found a great recipe for Strawberry Yogurt Muffins on the new Shrinking Kitchen website. Each big juicy muffin is around 125 calories and really tasty. I used spelt flour instead of all-purpose because that's all I had (really!). I also sprinkled a few sliced almonds on top to be fancy.

In search of healthy food at new Marlins Park

If you know me, you know I'm a big baseball fan and we go to a lot of Marlins games (as well as games wherever we happen to be on vacation).

And I don't take the day off when it comes to eating healthfully. (Besides, hotdogs are a nightmare of fat and preservatives.)

Last night was opening night at the new Marlins Park. The team's old park, which it shared with the Miami Dolphins, was too big and too built for football so the new park is much better for watching the game.

And the food choices are better, too. At Sun Life Stadium, the only healthy choices were a grilled chicken sandwich, a sad, overpriced chicken salad, and the occasional veggie burger, when they could dig 'em out of the freezer and heat one up.

We had a lot of time to kill before Wednesday night's game, so I scouted out the cleaner, healthier dining options at the park. Here it is in pictures (taken with my phone so I apologize for the quality of some of 'em). This is the first time I've seen a gluten-free concession at a sports stadium but I'm sure it's a growing trend, now that people are avoiding or cutting down on wheat and gluten. The prices are comparable with other concession stands at the park (ie: high), and there's a decent selection of entrees, desserts and even gluten-free beer. The chia chocolate muffin sounds promising. I like this idea: Kid-size portions of traditional ballpark food. Not only is it smart for little ones, it might be a good idea if you don't care to stuff yourself.

Among the healthy snacks are a fruit cup and a veggie and hummus cup.

These Kids Shacks are scattered throughout the park. I decided to try the food at Miami Mex, which also has multiple locations throughout the stadium. I snapped the menu, above, to show the selections and prices (ballpark food ain't cheap, y'all).

At left are the grilled mahi mahi tacos, which come in a pair of flour tortillas. They were flavorful and loaded with colorful vegetables, which are hard to come by at sports events.

The tacos were good sized and had just a drizzle of the vinaigrette and aioli so the fat content wasn't out of control.

Below them was a very costly side of guacamole and chips, given the size of the guac cup. For $7 I thought I'd get enough guac to share with my family but it was probably a quarter cup at most. It was fresh and fairly tasty, but would have used a little more zip from citrus or peppers. When the concession worker saw my nonplussed face, she gave me some consolation salsa, which was excellent. The chips were plentiful but I could do without the red dye.

In addition, there's a kosher concession stand that offers cheeseburgers made with soy cheese, a kiosk that has fruit smoothies and juices and a frozen yogurt place at street level just outside the park. Some of the Cuban places offer rice and beans but it wasn't clear whether those choices were vegan (chicken stock often is used in the preparation). I also spied a shrimp burger but I haven't investigated what goes into it. Shrimp is a fantastic protein choice, but if it's held together with breadcrumbs and mayonnaise it's not worth the calories.

Next time I may hit up the Kids Shack for some hummus and veggies and bypass the $7 guacamole.

And what can you do if you want to bring your own food? Ballpark rules allow you to bring in a factory-sealed water bottle no bigger than 20 ounces and a single-serve food item in a clear plastic bag. And any fruit must be sliced (to avoid the errant apple being chucked on the field, I guess).

Calorie counts? They're not listed at the park, so the cleaner the food is, the easier it'll be to figure that stuff out.

Posted by Gail Gedan Spencer in Dining Out | Permalink | Comments (1)