This is the TypePad home of Shrinking Sisters

As part of the TypePad for Journalists program, I now have access to the wonderful TypePad publishing platform, one that I used on my previous blog, The Skinny. Now I just have to figure out how to move Shrinking Sisters over here. 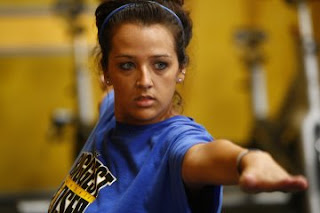 Jillian vows to help Michelle and Renee by beating the weight off of them. Aww, how generous of her. Poor naive Amy thinks all is well with Icky Vicky but she's still out to get her.

Then Ali trots out Jerry Rice and Steve Young who demonstrate an NFL-inspired combine workout, which Icky Vicky game-played to win. Boo. But she did win $10,000 to donate to a school to fight childhood obesity.

The challenge: More football. They have to catch footballs dressed in their cute little football uniforms. The blue team works in unison to wipe out the black team. Then Icky, nay, EVIL VICKY starts working to pick off Amy. Poor naive Amy. And Vicky wins again. Vicky exults "I'm goin' to the Pro Bowl!"

Rocco DiSpirito stopped by and showed the crew how to make a lighter Thanksgiving. His poached turkey looked really interesting as did the awesome stuffing. (Don't worry, I found Rocco's Biggest Loser Thanksgiving recipes). I may also give the quinoa pasta a try since it's higher in protein than the regular stuff.

After the Thanksgiving meal, they got to watch videos of their family give inspiring holiday messages. Spoiler alert: This stuff was filmed during the summer so the Thanksgiving messages were kinda weird. Since the finale is less than a month away (Dec. 16) all the contestants are home right now for Thanksgiving.

To read more, go to tinyurl.com/biggestloserdiscussion.

Fitting that the show starts out with a shot of the pool since the show has become like an episode of Melrose Place. So what did Icky Vicky's sign say?

REVENGE
Fool me once shame on you. Fool me twice shame on me.
I will not rest until that lying B!TCH is out of this house.

OMG, how much do we hate Vicky??? I am so embarrassed that I own the same sneakers as her. Loved the talk that Bob had with Amy. Wow, Bob actually understands the premise of the show: to lose weight and get healthy. Hear that, Biggest Loser Vicky loserpants?

Next Ali tools up in a Delorean dressed in hideous '80s garb. It was not a good fashion decade. Ed was awesome in his short-shorts and sweatband. A little word about '80s aerobic shoes -- total unsupportive crap. Both teams silly retro workouts involving breakdancing, step aerobics and Flashdance moves. Bob tries to bring the fractured Blue Team together but Vicky's having none of it. Let it go, Crazy Lady!

The challenge: They're holding onto 50 percent of their body weight and answering fitness questions. The losers get a Flashdance splash. Michelle won by convincing her mom to let go of the bucket.

Bob once again pleaded with Icky Vicky to bury the hatchet but she's not droppin' it. Jillian, on the other hand, led the most sadistic spin class I've ever seen. And then she showed them the wonders of plastic bags.

Read more at my Examiner column HERE. (The link is fixed now.)

During the workweek, I live on Lean Cuisines and other frozen meals, so I paid close attention to today's recall of three Lean Cuisine chicken entrees, because chicken's what I choose most often. The meals are being recalled because shards of plastic were found in some of the packages. Here's the info:

9.5-ounce packages of "LEAN CUISINE PESTO CHICKEN WITH BOW TIE PASTA" brand frozen meals. Printed on each side of each package is a production code of "8280595912" as well as a use-by date of "Best Before MAY 2010."

People who bought any of these products are asked to call the Nestle Consumer Services Center at 800-227-6188.

I posted this over at Examiner.com, but I'm also going to start posting my stuff here as well.

I'll just admit it -- I do not like Vicky. She's more interested in playing the game than in getting healthy. Although it could all be in the editing.

Bob had a little challenge with his team -- the person who runs the farthest in three minutes on the treadmill gets a "banana fudge sundae." I already figured out they wouldn't be diving into the real thing. C'mon, it's a new Jell-O pudding flavor! (And actually it is pretty good.)

All the eliminated contestants have returned and one of them will be rejoining the competition by winning the challenge. Coleen's dad had to work so he couldn't join in. Amy C. lost 47 pounds, yet evil Vicky didn't applaud for her! And then she said Phil shouldn't come back because he lost the most weight. Meanie! Phil was having none of her evil vibes. And what evil vibes!

The challenge: It's step aerobics ... from hell. They had to do 1,000 steps. Heba was shrieking at her husband (shut up!) to go faster, and it paid off because Ed won. Stacey came really close but didn't win, which would have been nice because she's a nice person.

Jillian doesn't want to lose so she "BEAT THE CRAP" out of her trio at the last-chance workout.

Weigh-in: Very good numbers from everyone this week. It was Michelle's goal to get to One-derland this week and she did, with bells on! She hit 194 pounds. I will be kind to Icky Vicky and salute her 8 pound loss and entree into One-derland but she's still a smug, little meanie.

Elimination: Right here, right now, there was no time to deliberate. The players moved from the weigh-in room to the elimination room. Brady seemed to have it in the bag with the Blue Team but Amy flipped and sent Brady off. The vote was tied but he lost the lower percentage of weight, so buh-bye.

Because I had a coupon, I bought a quart of International Delight Caribbean Cinnamon Creme coffee creamer this past weekend, instead of my usual unflavored Silk creamer. I knew it had more calories and sugar that the Silk but once I measured out the teeny tablespoon I realized I was in trouble.

The unflavored Silk creamer has 15 calories per tablespoon -- no biggie. The International Delight has a scary 45 calories. And fat-free is not much better at 30 calories.

And who puts a tablespoon in their coffee unless you're drinking from dainty china cups. I don't know about you, but my morning mug can double as a child's kiddie pool. A tablespoon doesn't make a dent in the darkness.

Would you consider putting a blob of Ben and Jerry's in your coffee every morning? That's what many people do with flavored creamers.

So it's back to the plain ol' Silk creamer. The International Delight now coats the inside of the garbage disposal with all its creamy sweetness.